Sandwich Baron, South Africa’s fastest growing sandwich franchise, is pleased to announce Philani Mlatshwayo, from the University of Johannesburg (UJ), as the winner of its ‘Varsity Eat Off’ competition. 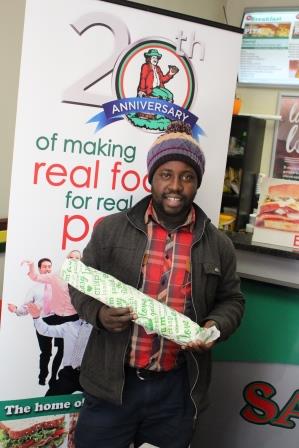 He was crowned as the 2016 ‘Ultimate Sandwich Baron’ following the defeat of two other finalists. Each was in turn the winner of a series of round-robin events held in June at each of three Johannesburg universities. Mlatshwayo will now receive a free sub-sandwich every week for one year.

The Varsity Eat Out was one of 20 activations initiated by Sandwich Baron in order to involve the various communities in which it is concerned into its celebration of its 20th anniversary this year. The round-robin took place at the campuses of UJ, Wits University and performance-art college AFDA, which consisted of a single round eat-off in which a number of students gorged themselves to see who could eat the most foot-longs in 20 minutes. They averaged three apiece.

Mlatshwayo attributed his success to his speed of eating technique. He explained that he had always been a quick eater, but also complimented Sandwich Baron on the excellence of its sandwiches, saying he was consequently “overjoyed” at his year-long prize.

Sandwich Baron was founded by Sally J’Arlette-Joy two decades ago, and since grew from one to 51 stores located in Gauteng, Limpopo, Mpumalanga, Northern Cape, Western Cape and KwaZulu-Natal. It is highly popular in the breakfast and lunch take-away markets due to its convenience to working folk and students alike.

“Sandwiches are among the most rapidly growing lunchtime choices of food, and the sandwich shop industry has enjoyed steady international growth in each of the last five years, largely supported by robust demand for healthy meal options and fresh ingredients. I am confident that Sandwich Baron will continue to grow from strength to strength and will be around for many more years to come,” says J’Arlette-Joy.